Mercedes-Benz has taken a new route with its latest junior AMGs by equipping them with a newly-developed in-line unit, displacing the V-engines used over the last two decades.

Designated the 53 range, we decided to put one of these models to the test on the R53, from Swartruggens in North-West to Parys in the Free State.

It was mid-morning when we stopped at the Ou Stasie in the centre of Swartruggens. Located on the main route from Tshwane to Botswana, the quaint little town is one of those places you drive through on the way to your destination without really taking notice of it.

Established in 1875 and named after the series of black ridges that surround the town, Swartruggens used to be a bustling little siding on the main railroad to the West but the demise of rail transport and a move away from maize towards game farming has seen it flounder in recent years. 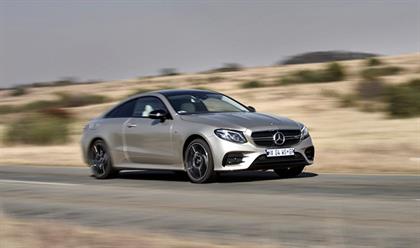 It also led to the closure of the railway station (nowadays only some Rovos Rail trains pass through the town) and the Ou Stasie now houses a curio and coffee shop … and a Man Cave. This is where we met Arno Schutte, a longtime resident of Swartruggens, and his son, Koos, at home from school for the holidays.

After enjoying delightful, steaming cappuccinos from the coffee shop Arno invited us into his Man Cave, introducing us to some of the delicious curry and chilli flavoured droëwors and biltong he makes on the premise. “It is my secret recipe, and people return for more after they bought some from me,” Arno proudly informed us.

He was right. It was delectable, so we left with enough droëwors to last two road trips – and after taking the obligatory pictures of the first church in town, we pointed the nose of our gleaming Mercedes-AMG E53 4Matic+ Coupé towards the turn-off from the N4 onto the R53. Our plan? To follow the R53 all the way to the town of Parys, 200 km away on the other side of the Vaal River. Mercedes-AMG, a high-performance powerhouse for Mercedes-Benz, has recently expanded its product portfolio with a new 53-badged model in the E-Class range. Interestingly, this new six-cylinder engine is an in-line powerplant – the architecture which established the reputation of Daimler-Benz as the leading builder of luxury vehicles in the world.Yet, while this engine layout served the German car-builder with distinction for over a century, it was completely ignored by Stuttgart for the last two decades.

Why? Well, a V-configuration is more compact and lighter, and its modular layout made it easier to adapt, and this led to its discontinuation in 1996; superseded by a range of V6-engines. Now, the legendary straight-six is back. Its return was undoubtedly initiated by the unrelenting thrust towards hybrid drivetrains and electrification within the industry, as this necessitates different packaging; easier to do with an in-line arrangement.

However, it is not just a normal in-line engine. No, this three-litre six-cylinder in-line mill is complicated and very advanced equipped with twin-forced induction and EQ Boost. This EQ Boost starter generator combines a starter and an alternator in one powerful electric motor sitting between the engine and the transmission.

With its assistance, the electric auxiliary compressor builds up high boost pressure without delay; making acceleration torque immediately available before the large exhaust-driven turbocharger kicks in. It delivers a healthy 320 kW and peak torque of 520 Nm in the E53 4Matic+ Coupé – with the EQ Boost starter generator (also powering the 48-volt electrical system) temporarily delivering an additional 16 kW and 250 Nm of torque.

This additional torque of over 700 Nm boosts the hallmark AMG performance of the E53; it accelerates to 100 km/h in only 4.5 seconds and can reach a top speed of 270 km/h. On the long tar ribbon dissecting the unending mealie fields, with brown Winter grass on the road edge flashing by, our Aragonite silver metallic Coupé was in its element.

Response from its extremely smooth engine, with its rich and throaty soundtrack, was immediate and without noticeable turbo lag, and coupled with an uprated, fast-responding Speedshift TCT 9G transmission, as well as AMG Performance all-wheel drive and traction control with torque vectoring, the E53 felt stable and composed in all circumstances.

We stopped briefly in Ventersdorp for, you guessed it, a picture at the Dutch Reformed Church building in the main street, before again setting off towards Potchefstroom. Roadworks on this section of the route slowed us down but soon we were in Potch, watching out for the turn-off towards Parys. With a designo interior in macchiato beige with nappa leather seats and upholstery with a fine diamond design, adding an extra R117,522 to the purchase price, as well as 20-inch AMG five-twin-spoke light-alloy wheels (for another R23,706), our E53 was truly exclusive, and caught the attention of passers-by as far as we travelled.

Leaving North-West behind, we cruised past the turn-off to the Vredefort Dome, a World Heritage Site covering the most representative part of the largest meteorite impact site in the world, with a crater diameter of roughly 300 km, created by an asteroid of 10-15 km in diameter. It was formed over two billion years ago, making it also one of the oldest verified impact craters.

We did not have time to explore the site, and soon after we crossed the bridge across the Vaal River to enter Parys, apparently named after the famous French city by a German surveyor named Schilbach who had participated in the Siege of Paris during the Franco-Prussian War.

The location next to the Vaal River reminded him of Paris on the River Seine and he also named the adjoining farms Issy and Versailles, after the two forts that were outside the French capital. With many artists that have now settled here and many new interesting shops and attractions, the town is the ideal breakaway close to Gauteng. A unique attraction is the suspension bridge, built in 1918 to connect Golf Island to the town. The current Town Hall was built in the 1930s in typical Art Deco Style after the original Town Hall was destroyed by a fire. Another interesting story is the history behind the name of Smilin Thru Resort, on the banks of the Vaal just outside the town.

It was originally named after the Boeing B-17 bomber flown by the American pilot Erwin C. Johnson in World War II. After the war, the Johnsons visited South Africa and bought the land adjacent to the river. The resort is now fifty years old and one of the landmarks of Parys.

All too soon it was time to find our way back to Gauteng. The Merc-AMG was quite frugal on our trip, consuming just under 10 l of fuel every 100 km. A capable and fast cruiser, the E53 4Matic+ Coupé substantiated the qualities Mercedes-Benz has become renowned for, and proved the German automaker is on the right route with its latest straight-six powerplants. Low roofline at the rear, no space for rear passengers, limited luggage space, can become thirsty when pushed.